Road Tripping Uganda – Flashing your Headlights While on Safari

“Is this done in the Uganda at all, or will it just confuse other drivers, or worse, insult them in some way? Where I grew up (rural Lyantonde Town) flashing the headlights was a warning that there was a policeman nearby trying to catch people speeding! Or may be a symbol that the road is clear, its normally followed with a sign of the finger to show you how the flow of traffic goes I don’t know if that is true other places in the US, but I would consider someone flashing their lights a warning but in most cases, if you want to allow someone to merge in front of you, slow down and give them the space to do so. If you want another vehicle to turn in front of you at an intersection where everyone stops, you can either just sit and wait for them to do so, or make a polite hand gesture (using all your fingers 🙂 ) for them to do so. As also said above, in many places someone flashing headlights at an oncoming vehicle would be seen to be warning the driver about something.

On another side, here, too– flashing lights to warn of a police car sitting with a radar gun.

Also, people will do it around here — coming up behind you — as a signal to get out of the way, you are going too slow! I am tempted often to do this…. but actually do not. I find it rude, so exercise patience instead behind a slow driver and wait for a place to pass. I will flash lights at the car in front of me when passing in low light just as I begin the pass to let them know I am passing.

Another point with respect to lights……you will see a good number of cars that appear to be driving during the day with their headlights on.. A good number of cars (but not all) on the road in respect to too much rain they will put the lights on and are equipped with DRL (daytime running lights). Basically, it’s the main headlight with just a lower intensity. During the day, it looks like the headlights are actually on. Some people also drive with headlights on as a good measure of safety. I have also seen roads that rand I have the same experience in that a flash is used to alert oncoming drivers of a hazard (wildlife or rocks in the road)/law enforcement. Of course, I am driving mainly on 2 lane roads so if someone is overtaking it is quick and done require headlights to be on if your windshield

I use flashes to signify things are okay, or “you go first” or as thanks. I don’t think there’s a lot of confusion. Repeating the flashes however – flash-flash-flash – pause – flash-flash usually is taken as a warning or a complaint (lower your high beams, etc.)

As to road etiquette, I conventionally flash for truckers wishing to switch to my lane and if I am not in a terrible hurry make room by slowing and subsequently flashing – especially when the trucker needs to get to the right [slow] lane relieving backed up traffic behind him; but also I’m sure to do this if coming to a split and it appears he needs to be in my lane.

For other cars, it’s a little different because you’re as likely to confuse car drivers who might think you are flashing to tell them to stay out of your way. If however, we are merging because of a traffic backup, maybe a creeping stop and go movement, I might blink to tell the guy to move over in front of me especially if he seems timid or confused.

In some states it is the law to turn on headlights when windshield wipers are in use; law or not, it’s probably a good idea; many newer cars do it automatically. On some routes where multi-lane roads merge to one on one against oncoming traffic you may see signs recommending turning on lights – it’s not a bad idea anyhow.

In rural areas it is clearly an extremely helpful thing to flash lights on and off several times to give warning to on-coming traffic about animals near the road, flooding on the road, an accident, or any hazard or risk. Frankly as a visitor I suggest you mind your own business when it comes to police with speed traps; warning others maybe illegal, it isn’t necessary or expected so leave it to the locals to do or not.

Uganda /Africa mostly consider it extremely rude for drivers in fast lanes to flash lights on and off trying to push slower traffic out of the way. It is acceptable to pass on the right in the slow lane. Be aware of this while on a self drive in Uganda, other cars could be overtaking you from the right.

In many states, when driving in the far right lane, on multi-lane roads, if coming upon a police car with flashing lights [generally having pulled over some vehicle] it is now a legal requirement to shift to over a lane provided it is safe with little traffic. A ticket is a low risk for this law, but it’s also a wise thing to do.

Always use the flashlights where necessary 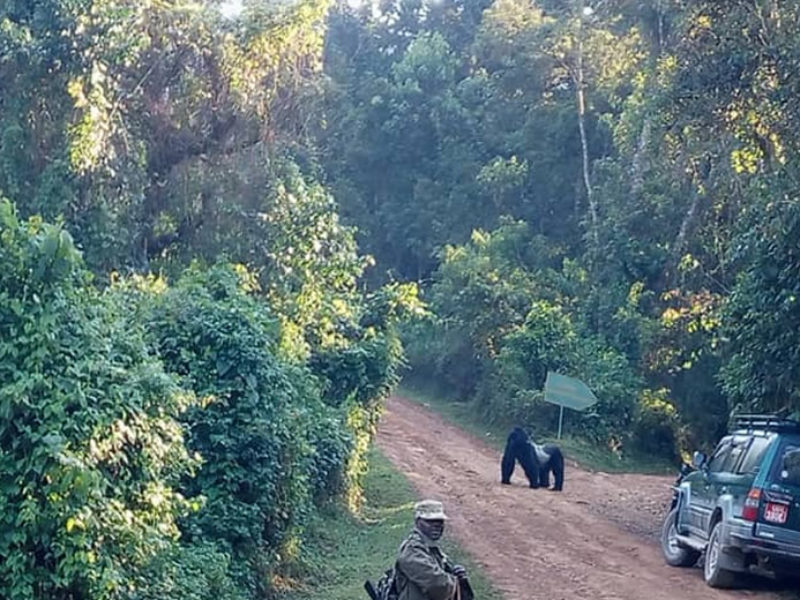 Guide to Choosing Best Self Drive Car in Uganda